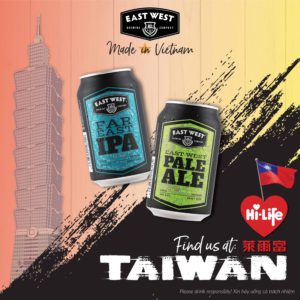 Taiwan is the first export market for the Saigon-based brewery in Southeast Asia, which had previously been focused on the growing domestic market share.

In addition to export, East West’s craft beers will be distributed primarily via the convenience store channel across 1,200 Hi-Life locations throughout Taiwan.

“For us, with Taiwan being the very first market is exciting just really to see what the reaction of other regional markets perceiving a Vietnamese product is like.” shared East West’s Founder & General Manager Loc Truong.

“Of course, we always ensure our beers are of the highest quality and world-class, but there are still many markets preceding us in craft beer brands!

The export deal coincides with East West’s domestic expansion, with the opening of a new taproom in UNESCO World Heritage Site Ha Long Bay planned for Q4 of this year.