EST. 33, the craft brewery owned and operated by Thailand’s largest brewery Boon Rawd Brewery Company Ltd., has just opened its first outlet in the USA, bringing the fusion of Thai craft beer and a food from the Land of Smiles to the Sunshine State.

Named EST 33. Thai Craft Brewery & Kitchen the brewpub is located on the 4th floor of the USD 1 billion Brickell City Centre development in the heart of downtown Miami, Florida.

It is the first concept brewpub Boon Rawd Brewery, better known for their Singha and Leo brand beers, have opened outside of their home market. 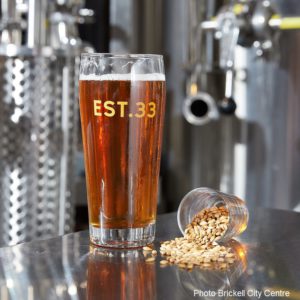 The name EST. 33 is an homage to the start-up of the company’s original brewery in Bangkok back in 1933.

The new outlet features a full service restaurant offering fusion Thai and US BBQ food. The brewery is housed in the interior of the restaurant and boasts seven fermentation vessels and a further seven serving tanks.

The EST 33. brewpub is inspired by the flavors, aromas and tastes of Thailand and the fusion with American BBQ culture lends a harmonious blend of Eastern and Western cultures.

Head brewer Todd Space, former Director of Education at the Master Brewer Academy, has worked with Boon Rawd’s brewers in Thailand to craft a range of beers to pay homage to the Land of Smiles.

“Legend Lager”, is refreshing blend of malted barley and noble hops from Europe, perfect for humid climates. “One and Only Kopper” is EST 33.’s take on the Vienna-style lager, with intense caramel notes that emulate Kalamay, a traditional sticky coconut rice delicacy. The “33 Pale Ale” balance the bitter-citrus character of American Cascade hops resulting in notes of tropical lime and passion fruit. 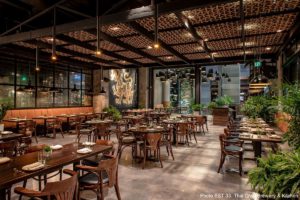 The brewpub relies on natural light and greenery to provide a warm, vibrant atmosphere.

“Our craft beers celebrate time-honored Thai traditions and the tropical influences of Miami,” he says. “Clean taste, exciting combinations and intensity are also hallmarks of our food and reflected in the beer recipes we have developed.”

EST. 33’s menu has been designed to complements the restaurant’s in-house brewed craft beers. The open fire grill menu features ingredients and spices characteristic of Asian cuisines which are further developed and deepened by the use of a hickory wood smoker.

Diners can enjoy a taste of Thailand through dishes such as Lemongrass Chicken, Thai Spice-Rubbed Beef Brisket and the signature Lobster Jungle Curry, cooked with baby corn, bamboo shoots and Thai eggplant.

The brewpub is able to seat 93 patrons indoors with room for a further 62 in a covered patio overlooking the mall’s open atrium.