Industry newcomer Specific Gravity Beverages Co. (SGBC), who launched their first beers only 6 months ago, received a gold medal and with it the trophy for the “Best Design – Outer Packaging” at the Australian International Beer Awards, judged in Melbourne (Australia) last week.

Longtime stalwart Brewerkz, who had entered the Craft Beer Marketing Awards, received a Global Platinum “Crushie” (the name of the CBMA trophy which is a sculpture of a hand crushing a can) for their Circuit Breaker New England IPA which was entered into the “Best Can Design/Pandemic Related” category. The Brewerkz can features an illustration of a man in a mask carrying home a pack of toilet roll and take-away food. He is walking past an iconic Singapore heartland landmark. This scene is reminiscent of the early days of the pandemic lockdown in 2020, known in Singapore as the “Circuit Breaker”, something the judges felt connected with the sentiments of the time.

The SGBC beer 4 Pack, which took home the “Best Design – Outer Packaging”, features patterns inspired by Peranakan motifs, a feature of the heritage shophouses in the island state. The Peranakans are an ethnic group that dominated Singapore culture in the 18th, 19th and early 20th century.

SGBC co-founder Devin Kimble told the Asia Brewers Network “We were blown away when we took gold and best in category trophy for our outer packaging. SGBC is a very young company and started trading in December 2020 so we are incredibly proud of our accomplishments a mere six months later at the AIBA”. 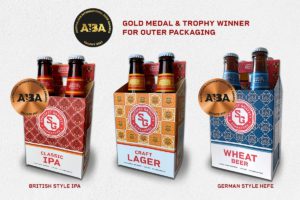 The young brewery also took home bronze AIBA medals for their Wheat Beer and Classic IPA, two of their core range, as well as their bottle labels.

Kimble explained how covid had fundamentally altered their path to market, meaning that they had to place a far greater focus on off-trade sales than they had originally intended. “For this reason we really focused on packaging design, making sure that it reflects our motto, ‘for Singapore by SG’. Michael Montisano, who is both our head of marketing and graphic designer, has done a fantastic job creating a packaging look that uses beer iconography layered into Peranakan motifs and connects our craft brewed offerings with Singapore and its rich history.”