One of Saigon’s newest craft breweries, Hoprizon, has opened its first flagship taproom.

The taproom is located in the up-and-coming hipster suburb of Tan Dinh located on the northern fringe of the city’s District 1, an area that has become widely known for low-key coffee spots

Phuc Tran, the founder of Hoprizon, had previously established himself in Ho Chi Minh City’s craft beer scene by opening Brewlliant, a taproom that offered a wide variety of local and imported beers.

“Since the beginning, we have been a distribution-focused brewery. After Covid, with the strong recovery of the F&B scene in Saigon, we want to take this opportunity to build our Taproom, a place not only features our most passionate work but also tells our brand story through the architecture and ambience design,” shares Mr Phuc.

“We are very fortunate to secure our current location which is right in the heart of District 1. With the taproom up and running, we can better fulfil our mission to cultivate a new drinking culture where people come to try awesome new craft beer and enjoy pairing with refined Vietnamese dishes.” 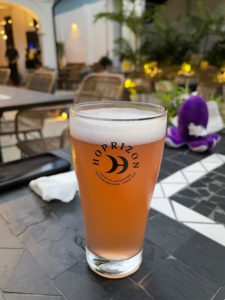 One notable inclusion on the tap system in Hoprizon’s venue is Vietnam’s first draft craft zero alcohol beer New Wave – Sóng Xanh Pale Lager, a serious bet in a market where high ABV is commonly associated with value by brewers and consumers alike.

“Since the day we decided to brew this beer, it has always been controversial. Some say this beer won’t work as no one would pay over 60k for a beer that does not provide the essential tipsiness that they look for. On the other hand, others think this is a great beer from a health perspective,” explained Mr Phuc.

“Sales-wise, it is not a good contributor, but brand wise I think it gets us the attention of the craft beer community. This debate is far from over, as many experts in the industry foresee the rise of the No/Low category. The definitive answer lies in the future. So let’s wait and see.” 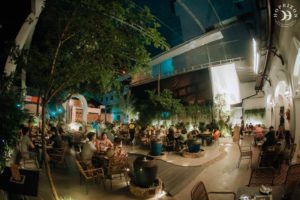