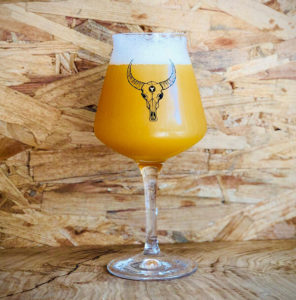 It’s a mouthful to order, but promises a fruity punch.

The CBD (cannabidiol) is produced from organically grown hemp from family-owned, U.S.-based farms for their new beer. “I’ve long been a fan of Yardley Brothers’ craft beers and am excited to work with them on their newest creative venture,” said Laurie Goldberg, CEO of OBX Asia.

The beer itself pours a bold saffron yellow and is juicy, refreshing and super chilled out at a low 0.9% alcohol by volume (ABV). According to Yardley Brothers founder and head brewer Luke Yardley “the flavour is reminiscent of a fresh slice of creamy, mango drenched vanilla cheesecake.”

Commenting on the inspiration for his latest unique brew and the changing landscape of the beer drinking scene Luke observed: “Beer drinkers are looking for alternatives to standard alcoholic and non-alcoholic options, and CBD is just the beginning” he continues “I see the future role of bars as being social pharmacies able to offer an array of options tailored toward the specific needs of the consumer.”

With this in mind the Lo/Hi Mango Cheesecake CBD Sour is the first instalment in a range of CBD beers planned by the Yardley Brothers brewery. They are also currently working on a wild ale project, having harvested native yeast from Hong Kong’s Lamma Island, and recently released a Pandan Coconut Tropical Stout as well as a Sticky Mango Imperial Gose.

The limited brew is currently only available on draft in selected outlets in Hong Kong.