Little Creatures shutters another of its Asian taprooms

Little Creatures shutters another of its Asian taprooms

The brewery, taproom and restaurant located in Mohamed Ali lane in the popular Club Street entertainment area closed their doors for good on Sunday 13th June.

Due to the “Phase 2 (Heightened Alert)” restrictions that had been in place in Singapore because of a recent covid-19 outbreak the taproom had been restricted to take-away sales only for the past month. 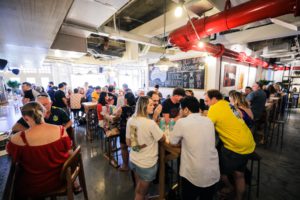 In a message on their website they announced “It’s with some sadness to announce that our Little Creatures Mohamed Ali Lane outlet has closed its (currently virtual) doors for the last time. We’ve had three great years at the Mohamed Ali Lane/32 Club Street site and are so proud of all the team that made it our home away from home in Singapore.”

Little Creatures Brewing Singapore opened in 2017 as a flagship outlet for the brand in Singapore. It’s relaxed atmosphere and casual Australian dining was an instant hit with consumers. The outlet featured a fully equipped kitchen and 5 hectolitre brewhouse.

The move to close it’s brewery and taproom in Singapore follows a similar one in Hong Kong earlier this year when Little Creatures closed down their popular Kennedy Town outlet in January.

At the time Monty James, Regional Sales Director for Lion Little World Beverages who own the Little Creatures brand, told the Asia Brewers Network that the move was to enable them to re-focus their energy on their growing wholesale business around the region.

The outlet in Kennedy Town was taken over by local Hong Kong brewery Gweilo Beer who have collaborated with the Wooly Pig restaurant group and reopened the outlet as “Grain”, a restaurant and brewlab.

The Singapore venue has also been taken over by a local brewery, though no announcement has yet been made as to who has taken on the popular location. Fans of Little Creatures need not worry though, a selection of their brews will be available at the new outlet and, according to their website, they’ll be bringing in some exciting new beers in the near future.

And for fans of the outlet’s unique ales? Don’t worry, in-house brewer Greg Brown will be staying at the Mohamed Ali Lane brewery to continue pumping out his popular brews.