Engkanto craft brewery has launched a vibrant new look to reflect its evolution as a brand.

Established in 2017 the brewery, based in the outskirts of the Philippines’ capital city of Manila, was founded on the idea of taking risks, trying new things, and setting a new standard for craft brewing in the archipelago nation.

This they achieved, but then along came the global pandemic severely hampering their growth as the country’s leading craft brewery.

Last year there was a change of leadership in the brewhouse with the appointment of Boxing Cat Shanghai’s ex-brewmaster Michael ‘MJ’ Jordan as the new head of the brewing team.

Emerging now from the global pandemic the Engkanto management team felt it was time to reimagine the brewery’s image with not only new label artworks that passionately express a renewed vision, but new variants that reflect the new brewmaster’s approach to reimagining their core range. 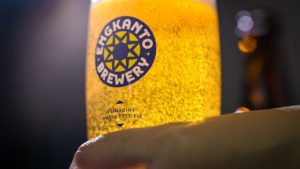 Michael has relished the challenge to help revitalize the brand: “It was fun to work with our Managing Director and Marketing Department to re-write the company manifesto and rebuild our identity brick by brick”

The brewery worked with renowned US based branding agency Creature Theory, who count well known craft breweries Stone Brewing and Sierra Nevada among their clients, to develop their new brand identity.

The new logo, replacing the old mystic moth, is a bold sun icon – created to be an enduring beacon of a more courageous, more passionate, more creative life. The logo is an iconic display of the brewery’s undaunted optimism and positivity and is reminiscent of the sun on the national flag.

Wanting to awaken people’s senses to realize how great beers can be while staying true to craft beer complexities Michael collaborated with acclaimed artist Dan Stiles to ensure the new labels on the bottles were as striking as the beer inside. It was important they reflected a positive outlook on life and the fun and simple yet intriguing appeal of the new variants Michael had created with his brewery team. Shaking up the flavour

The brewery team had realised the beers in the original portfolio weren’t connecting as well as they had hoped with customers new to the craft. The classic styles and high alcohol levels were not appealing to the new generation of Manila’s craft beer drinkers.

As a result the new line-up has been made more approachable not only in alcohol content and modern flavours but in the exciting, informative, easy-to-identify labels.

While still keeping the award winning Lager, now rebranded as Live It Up Lager as a homage to Engkanto fans since day one, the new range embraces homegrown produce and local communities. New brews High Hive Honey Ale and Mango Nation Hazy IPA featuring locally produced honey and mangos, a delicacy of the archipelago.

The Green Lava Double IPA explodes with waves of hoppy flavor and pronounced notes of grapefruit, mango and pineapple.

As the craft beer market in the Philippines gathers pace Engkanto’s contemporary and vibrant artwork combined with exciting new core range passionately express the revitalized spirit of the brewery, looking to the future with optimism.