The Republic of Korea emerged as the big winners once again at this year’s Asia Beer Championship.

Judged recently in Singapore, the annual competition celebrates excellence in Asian brewing with only beers brewed in Asia able to enter.

The Asia Beer Championship is judged every year around September/October with results (in ‘good’ years) announced at the annual SEA Brew brewers gathering.

As with previous years, the competition saw a strong contingent of breweries entering from the Republic of Korea, Hong Kong and Singapore and a growing representation from China.

Unfortunately, as a result of tough restrictions imposed by the national government which has limited production for much of 2021, only a small number of breweries were able to enter from Vietnam – though those that did enter took away a good haul of trophies.

In total, this year’s competition attracted 370 entries from 80 breweries across 15 countries. Slightly down from pre-pandemic numbers, but still encouraging given the current market conditions in many countries around the region.

“We’re encouraged by the support of the industry for this competition,” said competition coordinator Katherine Lee.

“Despite everyone experiencing a very difficult past 18 months there was still a promising number of registrations this year. It bodes well for next year when the market will have hopefully returned to a more normal footing”.

This year’s competition saw the number of categories expand from 22 up to 32 (28 for beer and 4 for cider), reflecting the most popular styles brewed across the continent. Some styles, such as the IPA, were also split into multiple categories (English, American & Hazy Style IPA) due to the number of entrants in previous competitions.

Once again Korean breweries performed well, with Artmonster taking the top prize of Champion Beer of Asia (presented by Barth Haas), this year with their Suda Sponsor American Pale Ale, beating a host of worthy finalists to the title. They also took home the award for Champion Medium Sized Brewery of Asia (presented by Fermentis).

The full competition results can be viewed HERE. 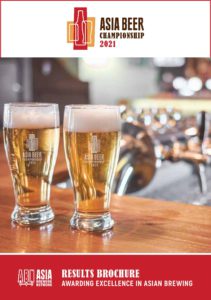 Click on the image to view the full Results Brochure

Competition judging this year was challenging due to restrictions imposed by the Singapore government limiting the number of people able to gather together. The gathering of groups for events was not permitted and each household was limited to only 2 unique visitors a day. As a result if this the judge appraised beers in small groups in homes and brewery offices around the country.

“We encountered a unique set of challenges not only for beer delivery to the many judging locations but to ensure the judges knew what they were judging as they are not permitted to see the bottle labels” Lee explained.

“In the end, all the beers were successfully delivered to the judges, ordered and wrapped so they could judge them ‘blind’.”

With the results collected Gold, Silver and Bronze honours were awarded to the top 3 beers in each style category. Notable beers that missed out on Top 3 were awarded a “Chairman’s Selection” certificate in recognition of their quality.

The team of judges unanimously confirmed once again the raising of the quality bar around the region with many of the Chairman’s Selection beers unlucky to miss out on trophies – on any other day they could have been worthy medallists. As there was unfortunately no SEA Brew conference again this year for the results to be announced at they were released at an online event hosted by the Asia Brewers Network on 28th October.

Of the 15 countries that breweries entered from 11 came away with medals, including a first medal for Myanmar. Korea topped the table with 7 Gold, 9 Silver and 4 Bronze.

This year’s competition included a new Minor Trophy category for winning beers in the most popular beer styles:

The full awards presentation can be viewed HERE on the Asia Brewers Network YouTube channel.

With an eye already on next year’s competition, Ms. Lee commented “We’re looking forward to 2022 when hopefully we can welcome international judges back to join our local Singapore judges and have a big party at SEA Brew to celebrate the winners”.

Next year’s Asia Beer Championship, organized by the Asia Brewers Network, will be judged in Singapore on 7th & 8th October 2022.