The Singapore based craft beer company who launched in 2016 have entered into a partnership with mainstream beer distributor East Asia Beverages (EAB).

Given EAB’s well established island-wide distribution network it is hoped the new partnership will help grow Crossroads’ presence in corners of the island nation not yet exposed to craft beers. There is also a desire to start growing the brand overseas.

EAB is a Singapore based beer distributor founded in 2020 by Adrian Sim, a 20 year industry stalwart. His desire being to bridge the gap between mainstream and craft beers. Having observed the rise of craft beers over the last few years Adrian was on the lookout for a brand to compliment his international beer portfolio. 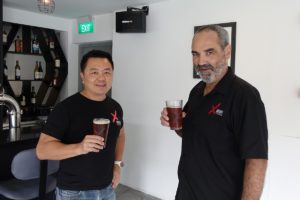 Crossroads founder Jim Kellett explained how the partnership had been in the pipeline for some time, though the global pandemic had been the incentive for the companies to finally join forces. With an eye on growth at home as well as possible regional expansion Jim told the Asia Brewers Network “Adrian was interested in the segment and I was looking for opportunities to expand distribution in Singapore while making time to focus on marketing our brand around the region. The pandemic provided the impetus for us to bring this JV to fruition”.

“EAB has always been involved with gateway craft beers” noted Adrian “but this is our first foray into proper craft. Crossroads will be a valuable addition to our portfolio as we are fully sold on the DNA of the brand.”

Crossroads, known for their light and sessionable ales, had seen good solid growth in Singapore’s bars and restaurants since their launch, however like others they were hit hard by the events of the past year.

By shifting to a direct-to-consumer model at the time of the ‘circuit breaker’ lockdown period (April 2020) they managed to keep all their staff employed and were well positioned to push ahead when Singapore began re-opening their food and beverage establishments in May last year.

Jim noted that since the start of the partnership Crossroads have seen a good up-turn in sales, particularly from non traditional craft beer serving outlets such as mainstream bars and those in heartland areas. “It is still early days, but we are already beginning to see an increasing thirst from the mainstream segment for good quality and authentic craft beer. We are seeing a growing acceptance of craft as a mainstream beverage.”

With economies cautiously reopening following the coronavirus pandemic Adrian is also optimistic for the future of craft beer in Asia “Craft beer has a bright future in Singapore and the region. We believe that together with Jim, we will be successful in bringing the world of craft to a wider audience.”