Carlsberg Malaysia has launched a year-long campaign celebrating the culture of Sabah & Sarawak.

Kaamatan & Gawai are culturally-infused harvest festivals celebrated by East Malaysian ethnic groups: the former by Kadazan-Dusuns in Sabah, the latter by Dayaks who primarily reside in Sarawak.

The ‘Sabah & Sarawak Pride’ packaging involves six designs of cans and bottles released in three phases in the two East Malaysian states throughout the rest of this year.

The first two designs were launched in the market in March, with the second phase of the release will be this month with the coming of Gawai and Kaamatan at the end of May and early June.

The last two bottle and can designs will be unveiled in Q4, potentially to capitalise on the popularity of Christmas amongst many indigenous Sabahans & Sarawakians Christians.

Each of the designs includes an illustrated ‘icon’ of the local culture in Sabah & Sarawak, including Sarawak’s longhouses (traditional homes) and hornbill and Sabah’s orangutan Rafflesia flower. 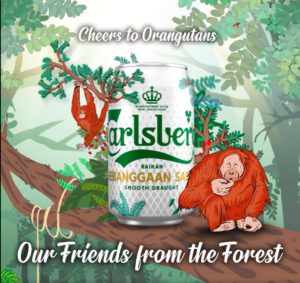 Carlsberg’s recognition of the festivals, part of an overall trend in Malaysia towards greater recognition of Gawai & Kaamatan, is likely the first for a beer brand in the country.

“Sabah and Sarawak are both well-known for their diverse people, languages, traditions and festivities, and so is Carlsberg, a brand that celebrates and pays homage to that distinction that the locals carry so proudly.

Last year, our first-of-its-kind festive cans in conjunction with the Gawai and Kaamatan festivals had such an amazing reception.

This year, we wanted to step it up a notch, by rendering some of the most notable local icons into works of art, using our products as the canvas,” said Stefano Clini, Managing Director of Carlsberg Malaysia.