Thailand’s convenience stores, long know as a desert for the palate of craft beer lovers, has welcomed a new burst of flavour.

As of October 2021 the award winning Mahanakhon White Ale, the flagship beer of the Mahanakhon range, is now available. An unfiltered and naturally cloudy Belgian style wheat (wit) beer it stands out from the other offerings on the convenience store shelf through it’s unique use of local grains such as Job’s Tears (a tropical grain), never used in mass market beers. Such ingredients, say founder Anthony Tumwattana, help achieve a silky smooth mouthfeel and depth of flavour. 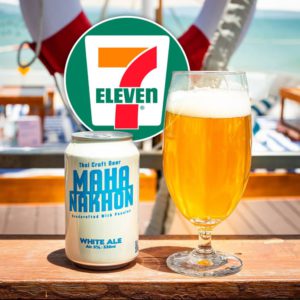 A beer with no home

Growing a brand in Thailand’s local craft beer industry has not been easy. Brewers face tough, well documented restrictions that make it difficult for them to produce and distribute their brews in country.

6 years ago Tumwattana began brewing within the underground homebrew community started by local mentor P Chit at Chitbeer, on a small island in the middle of the Chao Phraya river.

Tumwattana’s dream was that Thailand should have local options for beer as exciting and exotic as its food so he designed the White Ale to compliment and cool down the intense climate and fiery cuisine Bangkok is renowned for. Once Tumwattana decided to brew his beer commercially he had to take production abroad to neighbouring countries such as Vietnam and Taiwan and then import it back into the kingdom where they found craft beer sales venues limited. Thai craft beer has had to compete for shelf space in bars and restaurants with often cheaper imported premium products.

However, as with other countries around the region, the craft beer revolution rumbled on in the background and as local drinkers became aware of the new flavours demand grew. Finally, convenience stores such as 7-11 have recognized the growing trend and started to stock more craft varieties.

From humble beginnings brewing 20 litres of homebrew in his garage Tumwattana is now sharing his dream with customers across the Thai capital.

What’s next? The team behind Mahanakhon have just launched a new hybrid wheat/IPA beer, “White IPA”, which won a Bronze Award at the recent Asia Beer Championship. They will be brewing it at a new legal local production facility in Bangkok and are hoping to be able to list it in 7-11’s throughout Bangkok in early 2022.