Located at 36 Club Street, in the premises of the old Little Creatures Singapore Brewery, the restaurant and brewery is a celebration of craftsmanship in its beer and food, with a sharp focus on quality and taste.

Lion Brewery Co’s vision for the space is a friendly, welcoming venue that will support the craft beer community in a multitude of ways. Their 20 taps will offer a wide range of craft beers from local brewers as well as regional and international producers and, through this, offer customers a wide array of different styles, brands and flavours to explore. The outlet hosted a two week Celebration of Craft while it was undergoing renovation featuring local breweries Brewlander, Rye & Pint, Off Day Beer Company and Sunbird Brewing Co. who all feature on the new beer menu.

The multitude of bold flavoured beers available to customers require a menu that can hold it’s own, and that’s where local culinary talents, Kwek Xiu Rong (affectionately known as XR) and Sam Chablani come in. They have created a menu that aims to excite diners senses hand-in-hand with the beer and the inviting space.

Centred on an open flame grill with custom-built brick fire hearth the menu offers an array of small bites and large plates that seamlessly infuse local produce and flavours into classic bar and smokehouse recipes.

Dishes will also incorporate Thirty Six beers and ciders into the preparation. Walking the knife-edge between bold flavours and precise balance, the menu is designed to be paired seamlessly with beers, and a perfect match to the relaxed, welcoming atmosphere.

The minimalist décor features art from renowned local artists such as Jamie Tan. The venue clean lines are sophisticated, yet understated and feels both welcoming and relaxed. 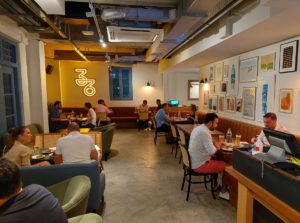 The interior walls are covered with artwork from local Singapore artists

While the restaurant’s core beer offering will include Lion Brewery Co’s Island Lager, Straits Pale Ale and IPA (India Pale Ale), the two talented brewers will work together to research, study and experiment with styles, techniques, ingredients and flavours to bring customers an exciting selection of beers on rotation.

They also intend to undertake collaboration projects with other breweries around the region once travel restrictions are lifted.

Intriguing new brews will be introduced on a rotating basis as ”Brewlab Beers”. These will be available on draught in the venue, and patrons wanting to continue sampling them at home will be able to purchase them for takeaway or delivery in 500ml cans or growlers.

Thirty Six is an exciting new space for the craft beer community, whether novice or connoisseur, and also for those those who want to find their “go-to” for congenial company, impeccable  beers and excellent food.

Japan’s Yebisu Heads Down Under