Last year’s championship saw the brewers of South Korea sweep the awards with 23 in total, including 8 Golds and clean sweeps of the IPA, Dark/Brown Ale and Stout categories. However there was to be no repeat of this performance for them in 2020 with honours more evenly spread across the region’s breweries.

Results broadcast across the region

Judged in Singapore in early November by professional brewers and accredited beer judges (and amid strict social distancing protocols) the annual competition once again assessed the region’s top beers. Gold, Silver and Bronze awards were handed out to the top three beers across 20 beer and 2 cider style categories.

A total of 31 breweries shared the 66 Gold, Silver & Bronze awards available across the competition categories. A further 17 breweries received Chairman’s Selection accolades for entering beers that were deemed to be outstanding examples of style (full results below). 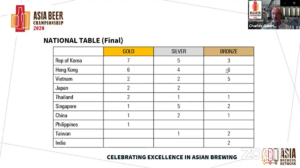 The award presentation was broadcast live to taprooms around the region

Due to the postponement of the annual “SEA Brew” brewers conference and trade fair in Taiwan where the awards were originally slated to be presented an announcement was made online and broadcast in taprooms across the region.

Despite not being such a dominant force in 2020 South Korean breweries still managed to top the medal table with 15, among them 7 Golds. Seoul’s Artmonster Brewery leading the way with 3 Golds, 1 Silver and 2 Bronzes. Noting how the limited number of categories makes this a tough competition in which to strike gold, Artmonster Brewery head brewer Jason Kusowski said “We are really excited with how we did this year. The limited number of categories and Asian bragging rights makes this competition pretty fierce”.

The brewery also landed the Fermentis Champion Medium Sized Brewery of Asia 2020 award as well as the Champion Beer of Asia 2020 for which Kusowski paid tribute to the hard work of his brewery team “It really is a testament to all the hard work the staff puts in every day, and I couldn’t be more proud. It also felt nice to bring that trophy home to Korea for the first time.”

A resurgent Hong Kong, however, were hot on the Koreans heels with 16 awards including 6 Golds and Young Master Brewery picking up the Barth Haas Champion Large Sized Brewery of Asia 2020 award for their 2 Golds, 1 Silver & 2 Bronze haul.

A new wave of breweries is emerging

As well as these familiar names the competition also saw the emergence of some newer additions to the region’s brewing scene.

This year’s recipient of the Asia Brewers Network Champion Small Brewery of Asia award was 3 year old Deadman Brewery from Hong Kong. Head brewer Jason Li hoped their success in this year’s competition would help them to “influence others to appreciate other varieties of beer and the craftmanship behind them”. 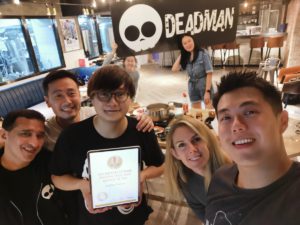 Korea’s Aleian Brewing Co., founded in 2019, struck Gold in the Fruit Flavoured Beer category with their Rastrawberry Gose on their first entry into the competition and despite domestic restrictions on alcohol production and advertising in Thailand Outlaw Brewing (2 Golds), Space Craft (Silver) & Space Duck (Bronze) breweries all took home awards for the kingdom.

Another first time Gold recipient, and the first ever for the Philippines, was Mitchell’s Backyard Brewery who were victorious in the Stout category with their Mocha Stout – breaking the dominance of the last two years of the South Korean brewers. Elated founder and head brewer, James Mitchell, told the Asia Brewers Network “last year we won a silver award for our pale ale, and this year it was great that we were able to step up our game by bagging gold for our stout and winning Chairman’s Selection awards for our American Pale Ale and American IPA”.

Predicting a healthy future for craft brewing in the Philippines he continued “We were joined this year by Elias Wicked Ales, making their first appearance by winning a chairman’s selection award for their IPA, alongside our Backyard Harmony IPA. That two breweries from the Philippines are turning heads for putting out great examples of American IPAs in such a competitive category suggests that this is a sign of more to come. Next year we will see medals for at least three Filipino breweries!”

Brewerkz Brewing Co. waved the flag for Singapore with a Gold and Bronze. They were joined by Civilization Brewing, the newest entry into the rapidly growing craft market in the city-state, who struck Silver with their Vienna Lager.

The Asia Beer Championship is an annual competition organized by the Asia Brewers Network providing a trusted quality standard which serves as a regional benchmark of brewing excellence. In order to enter the competition breweries must be brewing in Asia with their products commercially available to the public.

Next year the Asia Beer Championship will be judged in mid October with the results presented at the annual SEA Brew brewers conference and trade fair which will be held in Taipei on 4th & 5th November, 2021.