Pakistan’s tiny minority of (legal) drinkers had something to celebrate in 2021: the launch of a new brewery.

While the launch of a brewery isn’t a moment to note in most countries, the South Asian Islamic republic forbids its Muslim citizens (around 95% of the population) from drinking.

Those who seek to obtain alcohol face tremendous barriers as Pakistan has some of the world’s strictest laws against alcohol sales.

If that doesn’t deter enthusiastic Muslim drinkers, actually obtaining the stuff often requires dealing with ‘dealers’ (the challenge of which was shared vividly in this recent VICE article).

Besides conservative regulations, social pressure and the necessity for most Pakistani drinkers to rely on the black market, alcohol is also costly. DW estimates prices had tripled during 2020 and were still two times higher than pre-pandemic levels in 2021.

Murree Beer is Pakistan’s most popular brew, the brewery was founded by the British in 1860

Back to the brewery. Likely owing to the complexities presented by Pakistan’s liquor control legislation and Balochistan’s dual (and very distinct) separatist and Islamist insurgencies, Hui had initially applied for a brewing and distilling license in 2017. It was granted permission in 2018 and registered with Pakistan’s company office in 2020.

In an article shared on Hui’s LinkedIn page, the province’s Director-General of Excise, Taxation, and Anti-Narcotics Muhammad Zaman reported that the Chinese firm had invested 3,000,000,000 Pakistan Rupees (17,072,493 USD) in the region since 2018.

Hopefully, all the funds were directed toward the construction of the production facilities and corporate registration requirements.

Mr Muhammad had also commented to the well-regarded Pakistani newspaper Dawn that the beer produced by Hui “will be supplied to Chinese nationals working at various projects launched in different areas of Pakistan under the China-Pakistan Economic Corridor and mines and mineral projects in Balochistan.”

The rationale fits into the ambitious plans China has for Balochistan, the largest by land but smallest by population of Pakistan’s provinces. 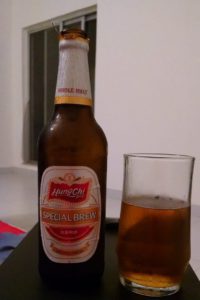 Despite a decades-old Baloch nationalist insurgency and severe issues with Islamist terrorism,  the province remains a vital part of the China–Pakistan Economic Corridor – where the PRC is building roads, airports, and power plants as part of a strategy to cement their enduring alliance with Pakistan and strengthen their economic power into the Indian Ocean region.

With tens of thousands of Chinese workers labouring, managing and prospecting throughout the Islamic republic, it is understandable they miss the taste of home – with Hui making much of their existing expertise in the PRC distillery market.

While there have been concerns and protests about using Chinese workers for relatively unskilled labour, ProPakistan reports that Hui is locally employing 140 locals and 20 expatriates – a balance that seems reasonable considering the lack of brewing and distilling expertise in Pakistan.

However, there is some divergence between the official story Hui presents to Pakistan’s media.

Untappd check-ins seen by Asia Brewers Network show that Hui’s Hung Chi Amber Ale is being sold and consumed in hotels in Islamabad. A brewery representative had also confirmed on their Google Business profile that “you can easily find our beer in Marriott hotel Islamabad.”

According to Pakistani journalists on Twitter, Hui has even begun to displace Murree, Pakistan’s best-known yet conservative (for understandable reasons, given the volatile climate in Pakistan) brewery in Balochistan – and perhaps beyond.

Pakistan’s Prime Minister Imran Khan will visit the People’s Republic of China in a few weeks. While it remains unlikely beer production will come up in bilateral discussions, the two countries will likely deepen their economic integration – and create more opportunities for Hui to sell their beer (and perhaps distilled beverages too).

Whether Hui will become a local best-seller remains to be seen, but for thirsty Pakistanis facing yet another surging wave of COVID-19 one hopes that it becomes slightly easier to find a glass or two of fermented (or distilled) beverages.