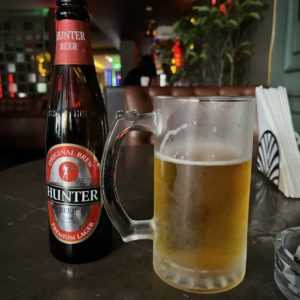 Beer enthusiasts in Bangladesh have two choices for their tipple: Hunter in a bottle or a can.

Bangladesh has undertaken the first major revision of its alcohol laws in 100 years.

In a package of reforms earlier this year paired with stricter enforcement, the South Asian state has loosened alcohol restrictions to drive domestic production and sales, appeal to expatriates and tourists, and fight back against the black market.

One of the key aspects of the law is that it obliges venues selling alcohol to buy at least 60% of their stocks from the country’s only legal alcohol manufacturers: Crown Beverages, who have made Hunter Beer since 2003 using a loophole in alcohol regulations, and state-owned Carew, a state-owned distillery that’s of a variety of liquor brands covering rum, whiskey and vodka.

While it has raised fees for license types and the drinking age has been formally set at 21, the government has also made it easier for restaurants and bars to sell alcohol, improved transparency in license applications and liberalised other aspects of alcohol trading.

This move to promote domestic production and expansion of legal sales channels has reportedly led to plans by Carew to launch two direct-to-consumer sales channels in beachside towns where Bangladesh’s tourism authorities are hoping to lure more international visitors.

“Since the number of sales points will increase under the new rules, we expect good business growth,” said Crown Beverages’ spokesman Shamsul Hassan in comments reported by Nikkei.

While reporting on Bangladesh often emphasises the Muslim-majority country’s hostility to alcohol, Barth Haas estimates the South Asian nation produces 20,000 hl of beer annually, all of which is made by the Jamuna group.

From a consumer perspective, only a tiny portion of Bangladesh’s Muslim population – reportedly 85,000 out of 120 million – have a license to drink alcohol approved by the government and a doctor. However, many reportedly buy alcohol through black market sales channels.

Amongst the 9% of Bangleshi’s population who are non-Muslim – around 15 million people – a permit is legally required to drink. At least 100,000 Bangladeshis from minority communities are also permitted to drink traditional locally brewed alcohol without a permit.

These restrictions mean that official annual beer consumption by Bangladeshis is around 0.02 litres, one of the lowest rates in the world.

However, as much of the market operates beyond the reach of official rules, it is difficult to get accurate estimates. The illicit imported alcohol market is reported to be worth at least USD 190 million, according to a report on the reforms from WION.

Unfortunately for beer culture advocates, raising tax contributions from Carew and Jamuna is the main driver for Bangladesh’s government pushing through this package of reforms.

The law change has come alongside a crackdown by Bangladeshi customs authorities and police over the past two years to stem the import of black-market liquor being imported, including targeting ‘diplomatic warehouses’ with raids and switching to digitised reporting to improve compliance.

While the long-term impact of the legal changes remains to be seen – particularly as conservative opposition parties have launched legal challenges against aspects of the law – Carew’s has reported a 50 per cent increase in alcohol sales versus 2021. It could be that brighter times are ahead for Bangladesh’s alcohol industry.