A glass of beer may not be the first thing that jumps to mind when thinking of a Christmas tipple, but breweries around the world have been cooking them up for millennia.

Despite their love of wine the ancient Romans still enjoyed a hearty swig of specially brewed ale during the festival of Saturnalia in mid December.

The Vikings raised a cup or two of strong malty brews to their gods during the winter festival of “Yule”, the pagan precursor to Christmas. One Norwegian king, Haaken I (c. 920-961), even passed a law that every household should brew a Yule beer to celebrate the festival; no wonder he was known fondly as “Haaken The Good”.

The British, for many centuries, have brewed “Winter Warmers”, strong malty-sweet ales brewed for the cold winter months.

The French, Dutch and Germans also have their traditional yule time beers, with these robust ales often complimented by the addition of ‘winter’ spices such as cinnamon and clove.

And in 1926 a certain Artois Brewery from Belgium released a “Stella” (‘Star’ in Latin) beer to celebrate the festive season. This clean crisp lager was so popular it became their best seller and they continued to brew it as a year round brew. Today “Stella Artois” is enjoyed globally and serves as the flagship brand for the world’s larges brewer, AB InBev.

The tradition of brewing up a Christmas ale has not been lost on the modern wave of craft brewers, if anything they have done more than any of the mega-breweries to keep the tradition alive. Across the USA, home to the modern craft beer revolution, you will find breweries offering robust, malt forward spiced beers throughout the festive season.

Breweries around Asia have followed the lead of their craft brewing cousins over the Pacific, latching onto the tradition of releasing a festive brew to spice up their beer portfolio and offer a little something different to their fans. Here are a few we found doing the rounds across Asia this year.

This 6% ABV (alcohol by volume) beer falls under the “winter warmer” beer style, featuring a deep malty body with pleasing notes of organic cinnamon and other spices. “It tastes like Christmas!” says founder and head brewer James Mitchell.

The Christmas Beer is an annual release for the Manila based brewery and with Christmas being a meaningful and fun holiday in the Philippines sales are always strong with some fans even asking for it to be a year-round brew, “It’s something that people look forward to having again, this year we already had customers asking in early November” recalls James.

Singapore may sit on the equator, but that hasn’t stopped Sunbird Brewing Company hitching a ride on the festive slay. 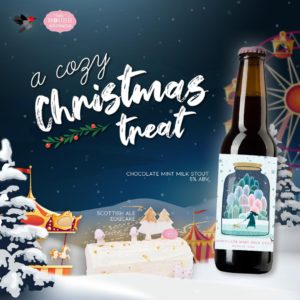 One of Singapore’s newest breweries, launched during the covid-19 ‘circuit-breaker’ earlier this year, has rolled out a Chocolate Mint Milk Stout. This seasonal milk stout has pleasurable aromatics of cacao nibs and mint, a creamy frothy head and semi-sweet slightly dry bitter chocolate finish.

Hearty and well-rounded this is a holiday beer for you to pair with a traditional British fruit cake or Christmas cookie.

Clive Tan, Director and Head Brewer, explains “When we think of Christmas, chocolate, spices, and a comforting drinking experience comes to mind. We want our final seasonal beer for 2020 to be a cosy and rewarding treat dedicated to fellow hard-workers.”

The brewery has also teamed up with local bakery Little House of Dreams (Tiong Bahru) to launch a Scottish Ale Chocolate Log Cake. The decadent festive treat is made with Sunbird’s best-selling Scottish Ale infused into both the rich cake batter and swiss meringue buttercream for a robust burst of roasted malt flavour. Meanwhile, up in Hong Kong Young Master Brewery want to know if you’ve been Naughty or Nice this year? But don’t worry – either way, you’ll still get something.

They have also released a “Celebration Ale”, a decadent Porter with notes of chocolate and coffee layered with a holiday spice blend featuring cinnamon, vanilla beans, cloves and orange. An aromatic brew perfect for holiday season festivities.

But don’t be fooled into thinking Christmas brews are the realm of the malt based beverage lovers, cider makers are also infusing their fruity offerings with festive spices. Their Festive Cider can be enjoyed chilled or heated up to fully release the Christmas scent and warm your soul; perfect for keeping out the chills on a cold Hanoian winter evening.

Winter will be over soon and breweries will be looking forward to a better 2021 and the next occasion to brew something special. The Kumquat Pale Ale is a light American style Pale Ale bursting with big, sharp, juicy flavours and captures the essence of the Tet celebrations.

First brewed for Tet 2019, Sales Director Mischa Smith explains how “the beer was such a hit both with our customers and our staff that we immediately decided we would brew it every year”.

And so the custom of seasonal brewing rolls on towards the next festival. Brewers head back to their books to work on their next recipe and the great drinking public go back to their usual brews.

We all have our regular go-to ales at our favourite watering holes, but why not take a moment this Christmas to try something a little different and raise a glass to tradition.

Cheers and Merry Christmas all!