So far the start of 2021 has been as unpredictable as last year with the rest of the year as unforeseeable as well. So I guess it’s fitting that trying to research and document a wild yeast experiment like this follows just as unpredictable a course.

The variables can change from day to day and spontaneous fermentation requires patience and the willingness to accept uncertainty.

As I write this (Jan 30) it has been one month since the beginning of this Lamma Island (HK) wild yeast project so I feel like this is a good point for an update.

For anyone who missed the first installment click HERE for a recap.

Before we get into the update, lets discuss the organisms behind the funk. Although the microbiology of beer is complex, the wild yeast most associated with brewing are natural strains of Saccharomyces and Brettanomyces (Dekkera) and, to a lesser extent, the yeasts Candida and Pichia which are oxidative yeasts that produce high levels of acetic acid when exposed to oxygen.

All four of these can independently be found on a variety of substrates including the surfaces of fruits, plants, soil and tree saps.

Along with these wild yeasts, acid producing bacteria such as Lactobacillus and Pediococcus are found in the wild as well and may well find their way into your wild brew.

Just so we do not confuse anyone and to set the record straight I’ll defer to Vinny Cilurzo of the renowned Russian River Brewing to help define the difference between wild and sour beers. Vinny categorizes “wild ale” as any beer that displays earthy Brettanomyces characteristics with some part of that beer having been spontaneously fermented, whereas a “sour beer” is when a brewer adds acidifying bacteria.

Now that we’ve got that out of the way, lets get to the update on our brew. 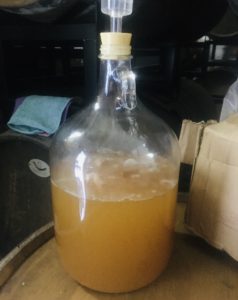 The day following our brew session (Day 2) the wort was racked into a clean new oak barrel as well as a glass growler for a control sample. The control sample was covered to ward off any chance of light struck beer.

By the following Monday (Day 4) there was visible signs of fermentation in both the growler and the barrel.

When I say “visible”, compared to a normal starter that has billions of yeast cells a comparatively small amount of microbes started colonizing the two separate worts. So, as expected, a slower start than a regular brew.

Now, a word of warning for those that want to attempt this experiment … despite the temptation absolutely DO NOT taste your experiment! That is, until your brew is fully fermented out. In fact, as a good rule of thumb never taste any starter unless active fermentation has been established for a sustained period of days, you never know what you may introduce by mistake into your brew.

On Day 11 we added to the barrel some wort from a single infusion mash (64c, OG 1.051) that was being prepared for a hazy IPA. The wort was siphoned off after the boil to top up the barrel but not the growler. With hindsight, this is where some unpredictability crept into our project.

By the evening of Day 11 fermentation in the barrel had kicked off again.

On Day 29 I paid a visit to Luke at the Yardley Brothers Brewery, where we were running the experiment, to run some simple lab tests on both samples to check on the progress of our project.

Carefully removing the cover from the control growler the first good sign was a nice pellicle formation on top of the wort.  We then pulled two samples, one each from the barrel and the growler.

Testing the PH of the samples is where we noticed the first difference.

While the growler sample maintained the same starting PH of 4.5, the barrel sample that we had topped up with additional wort had a PH of 3.4.

This we attributed to the introduction of more simple sugars into the barrel brew from the single infusion mash. These sugars had encouraged the development of more Saccharomyces and Lactobacillus which resulted in a rapid fermentation. The growler, on the other hand, with just the air inoculated wort and the turbid mash contained a higher portion of long sugar chains resulting in a slow and steady development of Brettanomyces. Lastly came the smell analysis. “Fresh” Brett fermentation can be described in many ways but a strong sensory description for myself is “rotten ketchup”, and that is the first thing that came to my mind from the fermenting growler (the pure wild yeast sample).

As for the barrel that was topped off with fresh wort, sulphur and lactic acid were the principle aromas evident.

Since the barrel specific gravity was now relatively low, we felt it was safe to go in for a taste test.

Sour lactic acid notes were clearly present, but what do we really have? Is it wild yeast? Is it something funky like Brett?

We know that microbes that live on fruits are primarily yeast and fungi, whereas vegetables and plants typically have lactic acid producing bacteria such as Lactobacillus and Pediococcus.

It won’t be until we take samples and create agar plates that we’ll know what is truly causing the souring, so as of now we can only go by speculation.

But after some discussion and our combined knowledge of wild microbes, we are pleasantly surprised with our outcome so far and will wait another month before creating agar plates. And that will be about time for another update.

Keep your innovations rolling and lets hope for a promising Year of the Ox! 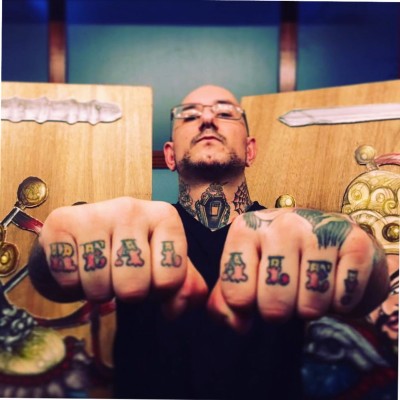