The Antimicrobial Effects Of Hops

The Antimicrobial Effects Of Hops

Hops “keep away certain putrefactions from beverages.” – a statement written by Hildegard von Bingen, in the herbal book “Physica“ from the 12th century (1).

In today’s language, this is equivalent to describing an antimicrobial effect that has been observed for centuries, not only in beer production but also for making bread for example (besides the hop’s long tradition as a natural preservative, there exists a couple of commercial applications outside the brewing industry, primarily when gram-positive bacteria must be controlled or inhibited in biochemical processing, as feed additives or food applications).

Beer production has always been connected to the usage of hops: primarily to achieve bitterness and aroma. However, over time as more and more additional effects in brewing are investigated, more attention has been raised when using this unique plant. Having in mind the antimicrobial effects especially against gram-positive bacteria, this article shall give brewers more information about the most relevant hop components and their inhibition on the growth of major lactic acid beer spoiling bacteria.

Any type of beer is also defined by its bitter units (BU). The bitter units typically range from 10 to 50, but also higher values have been observed since dry hopped beers became popular across the globe.

For beers hopped in the brewhouse, this value corresponds very well to the concentration of iso-alpha acids and both values, BU and ppm of iso-alpha acids, are usually rather close. It is known that beers around and below 10 BUs are pretty sensitive to beer spoilage bacteria, especially if they contain usable substrates for microorganism to grow.

This is the case for wheat beers for example, but also low and alcohol-free beers can be considered critical.

To be on the safe side, the choice of processing is often pasteurization of the final product, but if bacterial infections have already occurred during or after fermentation, a non-correctable result might be the formation of off-flavours such as diacetyl. This example shows that once the wort is cooled down, special caution is required to ensure microbiological stability during processing.

By using late hop additions in the brewhouse, a noticeable amount of alpha acids won’t change to the more soluble and intense bitter iso-alpha acids during the whirlpool rest. As a consequence, higher amounts of alpha acids can be found in cold wort and they additionally contribute to the hop’s antimicrobial protection at the beginning and during fermentation.

In various studies it was observed that non-isomerized alpha acids have even better antibacterial properties compared to their isomerized form (2,3). Thus, a late hop addition towards the end of boil (or to the Whirlpool) can also be seen as a traditional and natural way to achieve better microbial stability during processing, besides contributing to a certain hop aroma of course.

During the following production steps on the cold side of processing more and more alpha acids will get lost as they have a rather poor solubility. However, while the concentration of this hop compound reduces, substrates of the wort are fermented by the yeast, CO2 and alcohol is formed, the pH-value drops, processing temperatures decrease (especially after main fermentation) and in summary, the general conditions for the growth of typical beer spoilage bacteria are minimized.

Despite these bad growing conditions for beer spoilage bacteria and the inhibition effect of hops, beer contaminations and quality complaints still occur as these bacteria can adapt to the “beer conditions” and – up to a certain degree- can be resistant to hop bitter acids. As a result, off-flavours, haze and in a worst-case slime can be formed.

In a statistical evaluation of beer spoilage bacteria by Schneiderbanger et al. the most frequently occurring species was Lactobacillus brevis, especially in top fermented beers (4). This single strain caused more than 40% of all investigated bacteria-related quality complaints, with nearly 14.000 cases counted.

Unfortunately, L. brevis is rather hop resistant and one of the persistent representatives of the lactic acid bacteria. But also, this strain is brought to its knees, if brewers have a closer look on the pH-value for example. It is known that the lower the pH-value, the better the microbiological stability. On the one hand, the conditions for growth of microorganisms are generally worse, on the other hand the concentration of iso-alpha acids in their very effective undissociated form is higher (5).

Nowadays there is a huge range of hop products on the market. Hops and hop products are not only used in their conventional form, but also modified types are available, containing hop components, which do not origin in nature. Those products are primarily used for the production of light stable beers that are bottled in clear or green glass, or to enhance the foam of beer.

The two main products are based on either rho- or tetrahydro-iso-alpha acids. Regardless of their taste and other brewing properties it was often observed that tetra-products in particular have a very high antimicrobial effect due to their hydrophobic character.

In order to know more about the primarily used hop components in beer production today, we (in cooperation with the Research Centre Weihenstephan) have recently conducted a systematic testing of major lactic acid beer spoilers in combination with single hop components (6). The latter were dosed in concentrations of 10 and 25 ppm and typical beer spoilers were added to these beer samples.

The main objective was to determine the time until growth was observed in the presence of two different hop concentrations. The positive control without hop addition was taken as the reference. As an example, for each combination of almost 200 single trials, figure 1 shows the results for the iso-alpha acids, the major bittering component in beer.

Figure 1: Days needed to detect growth of beer spoilers in the presence of iso-alpha acids

For the two strains L. buchneri and L. coryniformis the presence of only 10 ppm (or 10 BUs respectively) completely inhibited the growth (yellow bars), compared to the unhopped positive sample in which the two strains needed 4 and 7 days to grow (grey line).

It is worth saying that L. buchneri and L. coryniformis are rather sensitive to hops.

The other tested strains were clearly inhibited at 25 ppm at the latest (blue bars), but mostly 10 ppm already effected the growth to a certain extent. As mentioned previously, especially L. brevis is one of the most hop tolerant strains and iso-alpha acids showed only minor antibacterial effects compared to all other tested beer spoilers.

In our trials, the tetrahydro-iso-alpha acids in particular showed a remarkable reduction in the growth of the tested lactic acid beer spoilers (data not shown; see publication 6) but the usage is limited in commercial application due to the intense bitterness of this hop compound. However, we have observed a very similar behaviour regarding the inhibiting effect of alpha acids.

Considering that alpha acids can reach considerable concentrations in late hopped beers and sometimes very high concentrations in dry hopped beers, this hop compound must be taken into consideration when hops are used to contribute to antimicrobial effects. In this case the application of AlphaExtract is another possibility that allows the brewer to add a natural preservative without changing the bitterness in a significant way (7).

When talking about hops and microbiology a frequently requested issue is the situation when it comes to dry hopping. In this case, hops (cones or pellets) are used during or after fermentation. As these hop products are not sterilized or treated in a way to reduce their content of omnipresent bacteria, there is always a certain input of bacteria while processing beer.

However, the good news is, that extensive studies were carried out about this fact and as a result, all worldwide samples tested were free from pathogenic and harmful bacteria.

With these results, earlier analyses from previous studies could be confirmed (8). In addition, a lower bacteria load was found in pellets, which could be explained by the temporary pressure and temperature increase during pellet production. This hop processing step obviously leads to a reduction of labile microorganisms in the hop product.

From a practical point of view, the following advice should be followed to minimize microbiological risks for dry hopping:

If these two advises are considered, you don’t have to worry too much about microbiological stability of dry hopped beers. As mentioned in the first part of this article, additional antimicrobial effects come from the hop acids themselves, once added during processing! 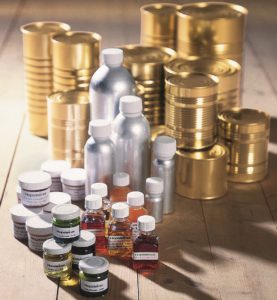 The wide range of hop products on the market can help brewers with problems like beer loss during production.

As an alternative to the usage of hop cones or pellets, various types of hop oil products can be applied (9).

Such products contain only the essential hop oils from certain varieties or a composition of typical aroma components that are assessed to be the typical, flavorful key indicators. Like this, microbiological considerations from dry hoping have not to be done at all.

If using hop oil products, there are also additional advantages like reduced beer losses, easier handling, or the possibility of yeast pitching.

In general, the production of dry hopped beer styles is very much simplified and similar flavor profiles can be achieved as with pellets.

In summary hops and microbiology are connected in a couple of ways and different hop acids have varying inhibiting effects against gram-positive beer spoilers. Beers with low BUs can be critical and some additional hop acids (e.g. alpha or tetrahydro-iso-alpha) can help to protect beer during production and shelf life.

When dry hopping is an issue, hops should not be added too early after wort cooling to minimize the risk, that some common bacteria might grow and finally infect the beer. A huge range of hop oil products is available to simplify dry hopping without any microbiological risk.

We would be pleased to assist with additional technical support. You can contact the Hopsteiner Technical Support Team at [email protected]