A recent trend in the 21st century is the commercial revival of ancient styles of beer.

The increasing popularity of styles such as Lambic, Celia, Berliner Weiss, and Chicha in Western markets are primarily driven by the craft beer industry in the United States. While some styles remain niche, they represent under-explored and essential segments of brewing history, cultural heritage, and bioprospecting potential.

Of interest here is the dried heirloom yeast “Kveik” of Norwegian farmhouse ales, representing a diverse and novel source of industrial yeast. There is a worldwide interest in this family of yeast due to its high-temperature tolerance (upper 30°C), fast fermentations, and lack of off-flavors. The idea of a quick turnover of tanks and forgiving fermentations (even with a lack of temperature control) appeals to many brewers, especially those looking at flexibility with minimal risks.

Over 400 years of geographic isolation and traditional practices have resulted in the divergence of Kveik into distinct lineages, separate from the modern Saccharomyces cerevisiae lineages used for industrial applications today. This paper explores some of the properties of 19 distinct strains of S. cerevisiae isolated from ten different farmhouse ales brewed in the western region of Norway.

These cultures represent a striking biodiversity among breweries, with some samples containing complex yeast and bacteria microbiomes. As for the yeast themselves, the aforementioned traditional practices have likely led to strong selective pressure to ferment at higher temperatures while also being able to withstand long periods of desiccation-induced dormancy. Indeed, the heirloom practice of repeated collecting, drying, storing, and passing yeast down generations have uniquely prepared this subpopulation of S. cerevisiae for applications in industrial drying.

It is worth mentioning that the clean-flavor of Kveik is genetically distinct from the other family of European farmhouse yeasts – Saison – which are diastatic and phenolic (Garshol & Preiss, 2018).

Distinct organoleptic properties were noted for each strain, indicating high genetic diversity within samples and strong potential for novel brewing applications. Of these isolates, one strain was been found to be particularly well suited for very high-quality industrial drying practices. This strain eventually reached the market under the name LalBrew VossTM in recognition of the region it originated from.

From these 31 isolates, 19 distinct inter-delta PCR profiles were identified (Fig. 1 & 2). All 19 profiles were deemed novel when compared to strains already stored within the Lallemand yeast culture collection (Shayevitz & Fischborn, 2020).

From these 19 unique profiles, fermentation competency was tested under extreme conditions to mimic the harsh environments traditional Norwegian farmhouse ale microbes are subjected to. These were characterized as high-gravity (18°P) and high temperature (30-40°C) brews. Additionally, competency under fermentation conditions traditionally thought of as “ideal” (12°P, 20°C) were examined. The selection process primarily focused on fermentation efficacy, metabolic compounds related to temperature and high osmotic pressure. (Not all results are described in this article). Figure 1: Typical PCR fingerprint of 18 of the 31 isolates of Saccharomyces cerevisiae strains originating from 10 cultures of Norwegian Kveik. Two profiles exhibiting the same number of bands and at the same level indicate that they cannot be differentiated using this particular method and are likely identical or extremely similar. Examples of identical and similar fingerprints are highlighted. Strain #6 on this figure is the commercially available LalBrew VossTM. Following the genetic characterization, the strains were selected for further testing in the hopes of finding a first isolate to dry and make available to commercial and homebrewers around the world. In this study, some of the results of the selected “Strain 6” (LalBrew VossTM) will be presented and discussed. The full characterization results of the 19 strains will be the subject of another publication.

Laboratory trials have shown that Strain 6 can ferment a standard 12°P wort at its preferred temperature of 40°C within 72 hours. At 25°C, Strain 6 performs very well, albeit a little slower compared to 40°C (Figure 3). When brewing at high gravity (18°P), it is even more important to respect the ideal temperature of 40°C since performance decreases quite drastically at lower temperatures (Figure 3). Figure 3: fermentation kinetics of strain #6 at different temperatures and original gravities. Pitching rate was normalized at a rate of 1×106 cells/ml/°P by propagation of yeast slurry using 6°P wort and incubating with agitation for 24 hours at 27°C. Cell count and viability checked was performed using a Nexcelom cellometer to obtain dilution data for normalized pitching.

Distinct performance profiles can be observed among 19 variant strains of S. cerevisiae isolated from ales produced by traditional Kveik cultures. As previously outline by Priess et al (2018), there is evidence to support the hypothesis that the so-called “Kveik” yeast of Norway are a genetically distinct subset of S. cerevisiae, forming their own groups within the greater family of domesticated brewing yeast outlined by Gallone et al (2016).

Within the context of this study, Strain #6 represents a well-characterized strain proven to be competent as a brewery workhorse – capable of fermenting at a wide range of temperatures and wort densities. Continued research into previously unexplored lineages of S. cerevisiae will likely yield even more competent strains with a greater variety and genetic diversity than what is currently available.

The Voss strain was obtained from Sigmund Gjernes from Voss in Norway. He maintained this culture using traditional methods since the 1980s and shared it with the brewing community. This strain was found to support a wide range of fermentation temperatures between 25 to 40°C, with an optimal range of 35 to 40°C. Very fast fermentation (typically 2-3 days) can be achieved within the optimal temperature range.

A typical pitching rate is 50-100g/l depending on the wort’s gravity and how much ester production is required (lower pitching rate = more esters). For high gravity brewing, a higher pitching rate and nutrition may be needed. The flavor profile is consistent across the entire temperature range, neutral with subtle fruity notes of orange and citrus, as seen in figure 4. This yeast, like all Kveik, is very flocculant; a characteristic that has been essential to the continuous reuse and survival of the cultures.

The type of beer most produced with this yeast are farmhouse ales, modern and traditional ales, English ales, and IPAs. The yeast can be reused after fermentation for up to 5 subsequent generations according to best practices.

As with any strain in dry form, rehydration can be performed before pitching. However, most recent tests have shown that there is no difference in performance with or without rehydration. The dry yeast can be kept in the original package unopened at refrigerated temperature until the expiration date. If the pack is not entirely used, it can be resealed, kept frozen or refrigerated, and used within a week. 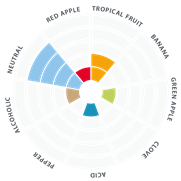